skip to main | skip to sidebar

Welcome to the course FNSC5110 Blog

Just to remind you to get and study the files on the Blackboard, CUHK Elearning system for Lecture on 6/12/2016:

Also to remind you that you need to study all the materials covered in lectures and also those in the mind maps, ppts, and notes. Only the topics covered in lectures will be included in the final examination. For example, if I do not cover fungal pathogens in the lectures then fungal pathogens will not be inlcuded in the final examination.

The final examination will carry two parts, 50% each. One part from Professor Chung and one part from me.

Go to the FNSC5110 blog to see the questions asked by the students in previous years and also the answers.

Yes, you are correct. HACCP and hazard analysis are not included in the FNSC5110 final examination.

HSK
From: AAAAAAA
Sent: Thursday, December 01, 2016 1:21 AM
To: hoishankwan@cuhk.edu.hk
Subject: FNSC 5110 QUESTION ABOUT REVIEW
Dear professor,
I am reviewing the old paper about FNSC4180/FNSC3180 and I found that the exam paper covered some questions about HACCP and hazard analysis. Will this part of content also be included in FNSC 5110 final exam? I remember that you did not cover this part of the content in our lecture.

Question from a student--please note the revised answer

I think you have look at the old exam paper of FNSC3180/4180. Question B3 has not been covered in FNSC5110 lectures this year and not in past few years so it will not be included in the final examination.

The other question is straightforward:

B3a What are the numbers of D'S targeted in the standard canning process for each of these microorganisms? (3 marks)

Sorry, my answer is wrong: The targeted number of D's in the standard canning process should be:

Because I missed the part of the question of "standard canning process", which means the condition is set as the process. So the achieved number of D's should be the answer.

Dear professor
1 .   These 45 patients were Food and Nutritional Sciences major students who went to a picnic together with another 115 students and professors. Lunch was served during the picnic:
Menu--Pizza (with topings of ham, olive, pineapples, and green pepper), sushi, and bread. Dinner was served in the evening: Menu--boiled chicken, roasted turkey, fried rice and fried noodles
li.    Lunch in the picnic was served at 12:00 noon on Saturday. Dinner was finished by 7:00pm that evening.
iii.      Patients started to have diarrhea at 1 1 :00pm on Saturday followed by severe vomiting. Some of them went to the hospital immediately after they were sick. The last patient felt sick and went to the hospital at 4:00am on Sunday.
iv.      The hospital laboratory detected low levels of Salmonella enterica serotype Typhimurium from the feces of 5 patients.
v.        The laboratory of the Health Department detected low levels of Salmonella enterica serotype Typhimurium from sushi left over from the picnic and refrigerated after lunch. Also detected are low levels of Staphylococcus aureus from the dough used to make the pizzas and Low levels of Clostridium perfringens endospores in the vegetable stock used to make the turkey stuffing. No bacteria or spores were found from bread, fried noodles, boiled chicken, or fried rice.
vi.      The turkey and bread were prepared in the morning and transported to the picnic area at room temperature. The sushi was also made in the morning, stored in a foam box with ice and transported to the picnic area. The pizzas were baked right before lunch time and transported to the picnic area and they were kept at 65-70 0 C. Boiled chickens were cooked the day before the picnic and kept in refrigerator and sent to the picnic without refrigeration. Fried rice and fried noodles were prepared at noon and transported to the picnic area in containers kept at 65-70 0 C by the supplier.
vii.    Most of the patients recovered after one day of rest.
a.        The foods consumed at breakfast and lunch and the illness records are listed in the following table, calculate the attack rates. Which food would be the most suspected food? Explain briefly.     (8 marks)

B5. You are the senior technical manager of a well-known ham canning factory.
One day the technician rushed into your office and informed you that the ham delivered yesterday for canning was slightly contaminated in an accident during transportation. The ham, however, was still suitable for human consumption. The technician wanted to know whether the standard canning process was still sufficient. He provided you with the information from the quality control laboratory as described below. What would be your decision?
Standard canning process for the ham:      25 minutes at 105 0 C.
Answer the following questions. Show your calculations for partial marks:

Microorganisms to know well for 2016-17 Examination

You should know their biological characteristics, e.g. pH range, temperature range, and so on.

You should also know the foods closely related to these microorganisms

Question from a student on examination question

I re-do the past exam paper as to prepare for the final exam, but not sure on one question (See attachment). Please let me know if I made any mistake or suggest a better a solution. 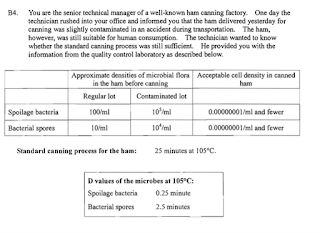 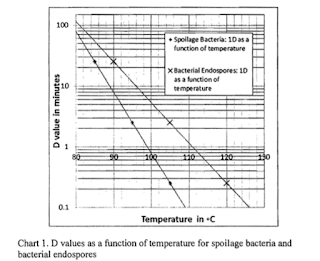 Your answers to the questions are correct except one: Your answer to the last question is incomplete: you can only use one treatment time to treat each lot. You need to use the time for the most heat-resistant microorganism, in this case, bacterial spores. So the times should be:

--Welcome to the FNSC5110 Blog
--This blog provides resources for the Food Microbiology part of the course FNSC5110 .
--Check this blog often to see what is new.
--Lecture notes and powerpoints are listed in CUHK Blackboard System.
--Click the Glossary button to search information on food microbiology terms.